Drone video is still as popular and as prevalent as it ever has been. But what is drone film? In basic terms, it is the use of a drone camera to capture large landscapes and cityscapes from a birds eye view position.

Drone film can vary in price depending on what you are after, are you wanting footage or just photos, for example. However in comparison to our other video production services, drone filming is cheaper to do. Most video production agencies will charge on a day rate basis which may be anywhere from £500-£1000 a day depending on the level of experience. 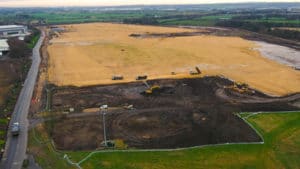 For the construction sector in particular, drones allow for easy capture of a site or landscape, that you couldn’t possibly do with a film crew. The pilot can do multiple shoots showing the progression of your site, allowing you to update your audience on what’s new and what your site will eventually become. Drones are also a useful tool for site surveys, to help measure areas of land or provide a closer inspection of a tower or tank for example that may require maintenance.

The shoot is relatively simple, a pilot will check and survey the area first to ensure there are no restrictions in place. Once they arrive on site they will have a plan about where they intend to fly. Once in flight, which normally lasts 12-15 minutes they will conduct the shot and film the shots required. Depending on the length and logistics, the turnaround time can be relatively quick for edits.

The popularity of using drones has escalated over the past few years and for the construction sector this has been a key way of capturing site progress on an epic scale and showcase this to your audience. It’s popularity is always increasing as the technology improves, as does the amount of people devoting their careers to being drone pilots. 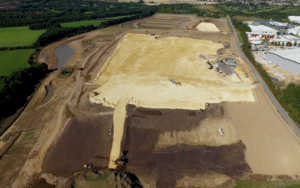 Depending on your site and where you are, mostly anything can be filmed as long as you have a license. However the drone can’t fly over roads as this  is restricted – this can’t be done in any fashion so it should always be done on site or if you have special permissions if you need to cross over roads. You also can’t fly a drone within 50 metres of any person, vehicle or building not controlled by you. In addition some areas of land may have certain perimeter restrictions such as nuclear power stations and airspaces. Some sites will allow you to fly within a restricted area providing permission is granted first. There aren’t any licenses you need to have a drone shoot your site, however you should always make sure that your pilot owns licenses to shoot. They should always register as an operator and have a Part 107 drone license so they can make money from what they are doing. In addition to this you will need to ensure their insurance information is valid and up to date.